Back to the Past: My first backpacking trip

In January 2008 I bought a backpack in the Silk Market in Beijing and went backpacking for the first time in my life. We travelled by train, leaving from Beijing, and the chosen itinerary was Datong, Pingyao and Xi’an. 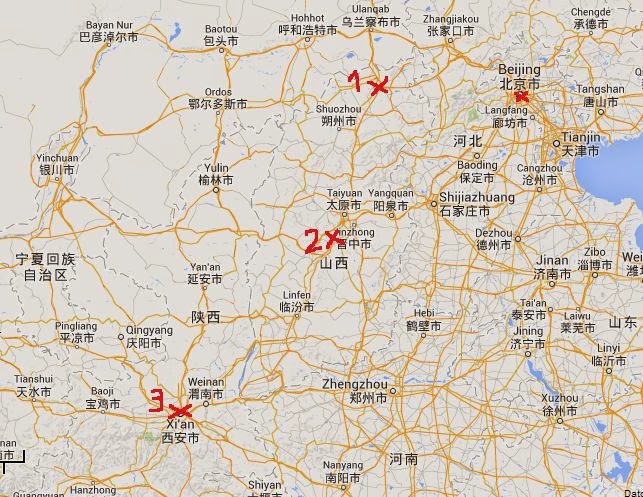 The trip didn’t start very well. First, to buy the train tickets I had to queue for an hour, by night, in the street, at minus 7 degrees Celsius (it was just before Chinese New Year). Then, on the departure day, we arrived to Beijing Station and, to our horror, found out that we were in the wrong station. We were departing from Beijing West Station!! So we took a taxi and arrived to the right station two minutes after the scheduled departure of the train. But we were very lucky: the train was delayed! It has been the only time I have seen a delayed train in China. That was pure luck.

The train from Beijing to Datong was eight neverending hours of sitting on a hard bench and being squeezed by people. The train was completely full, even the tickets to stand were sold out. I remember hearing strange dialects I had never heard in Beijing, and a boy whose ears were so dirty they were black. When we arrived to Datong it was night already and it was snowing. We stayed in a cheap hotel besides the train station. I hadn’t booked in advance and that’s weird, as I am a big fan of planning everything in advance.

The following morning we hired a taxi driver to take us to the sights around the city: the Yungang Grottoes  and the Hanging Temple. Both are several kilometers away from Datong and can be easily visited within a day. We first arrived to the Yungang Grottoes and realized that we had been, again, extremely lucky: there was no one there! We were the only visitors! Probably because it was really cold. But it is not every day that you go to a tourist site in China and have it all for yourself.

The Yungang Grottoes are probably the coolest place I have visited in China. Thanks to my China X class from EdX, now I know that they were built by the government during the 5th and 6th century as an apology to have previously tried to wipe out Buddhism from China. Wikipedia says that there are more then 50,000 statues sculpted in the rocks. 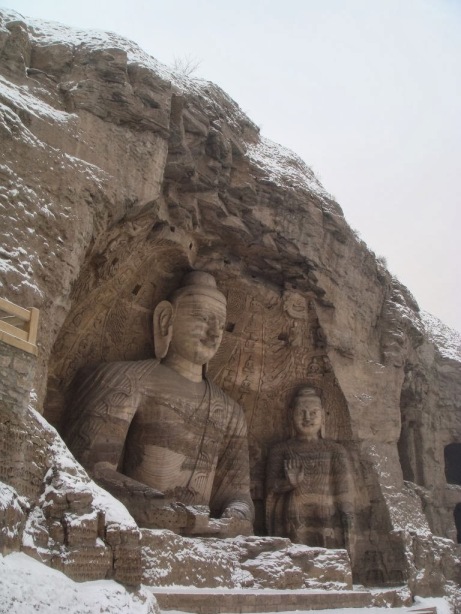 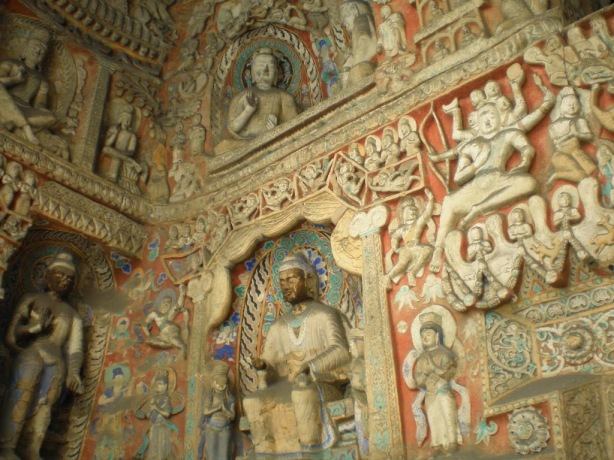 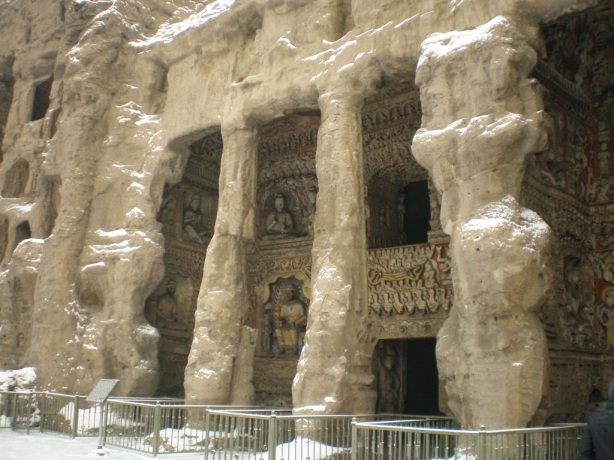 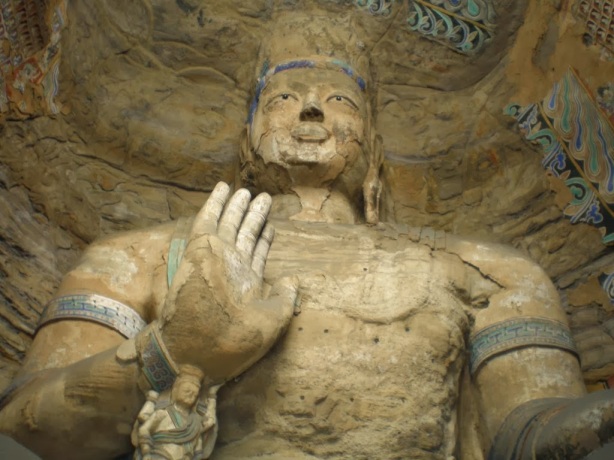 The Hanging Monastery is also an amazing sight and we could enjoy it without having to share it with any other traveller. 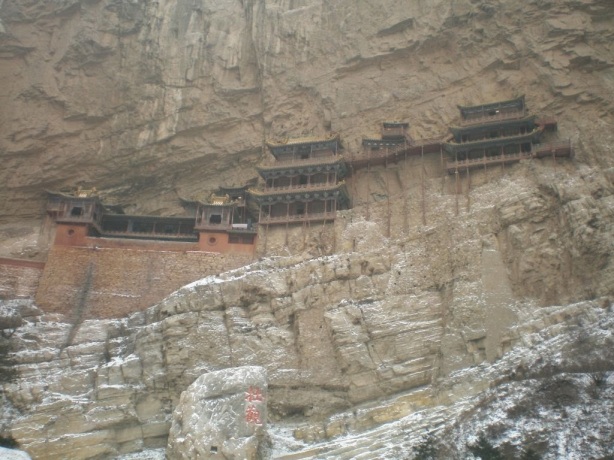 It was built on a vertical wall. It is completely made of wood. 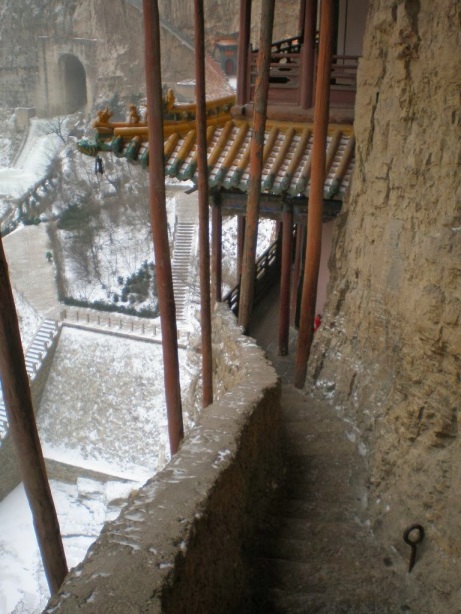 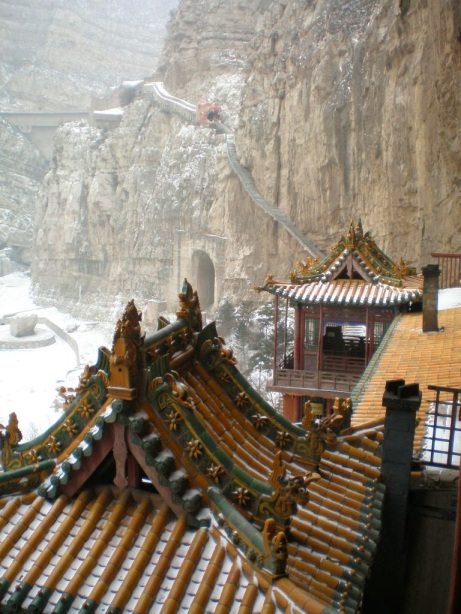 That day the highest temperature was like minus 7 degrees Celsius. I remember it because I took a picture of the weather forecast displayed in the hotel reception. 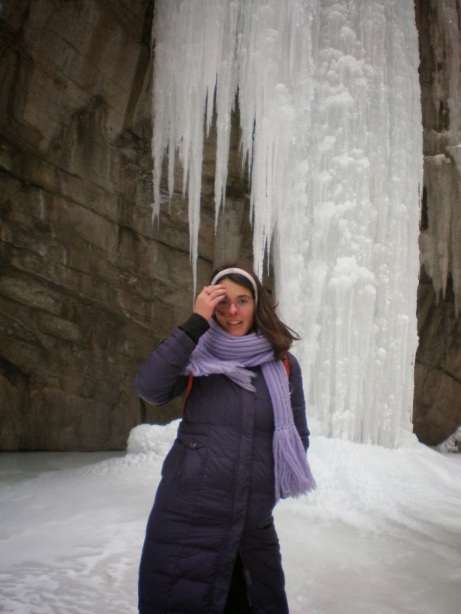 That thing behind a younger version of me is a frozen waterfall!

Apart from these two sites there’s basically nothing else to see in Datong, which I remember as a quite ugly city. So we went on to the next stop, Pingyao, after speding the night in Taiyuan (there were no tickets left for Pingyao).

Pingyao is a nice little town from the Ming and Qing dynasties and inexplicably has successfully survived pretty intact (Chinese people usually love to put int practice “down with the old, up with the new”). It has been the setting for many movies and tv dramas (Raise the red lantern was filmed nearby). The old part of town is not very big and we saw it in a day, riding a bycicle that a hostel lent us. While I was riding my bike I passed like 10 meters away from a kid who was pooing in the street and he saw me, waved at me, and started yelling HALLO at me while he was still doing his thingie. 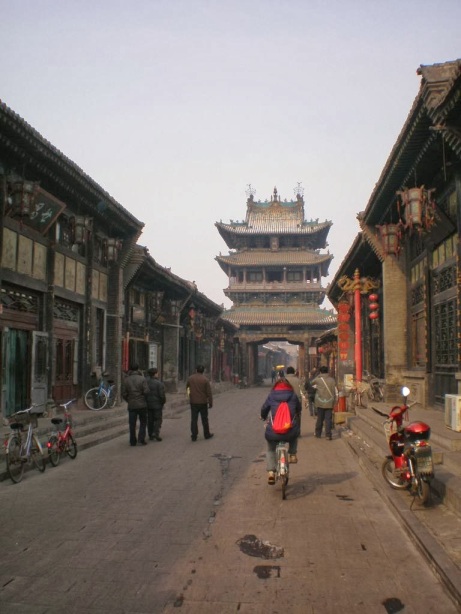 The third stop in our trip was Xi’an. Of course, when in Xi’an you have to go and see the terracotta warriors. But I have to confess that I wasn’t impressed by them! Maybe because I had already seen so many copies (there are terracotta warriors by the doors of every restaurant and hotel in Xi’an, and also in other parts of China). True, in the site in Xi’an there are a lot of them together, but still… I found quite kind of disappointing. 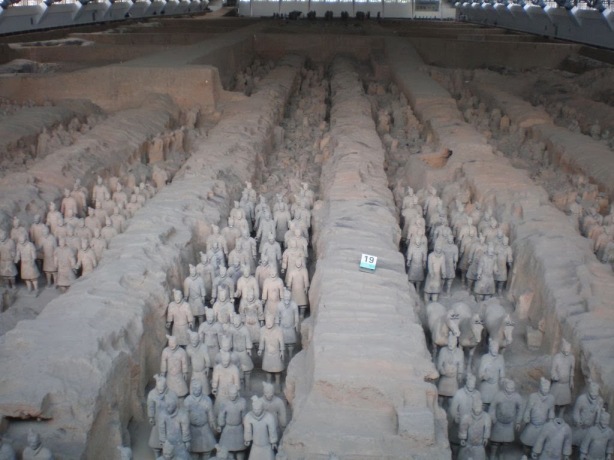 I really liked Xi’an, the city itself, it had a character similar to Beijing, or at least I thought that. We visited the muslim quarters, the Wild Goose pagoda and we walked on the city walls. You can actually walk all around the city center on the city walls, they have a perimeter of almost 14 kilometers! I also remember that we stayed in a very nice hostel which was also very cheap (20 RMB per night!) and they organized a dumpling party for all the guests: we had to 包饺子 make dumplings with the dough and the filling prepared by the hostel cooks, and after they boiled them and everybody ate together. I have always felt making dumplings is very difficult, I never get them to stay closed! 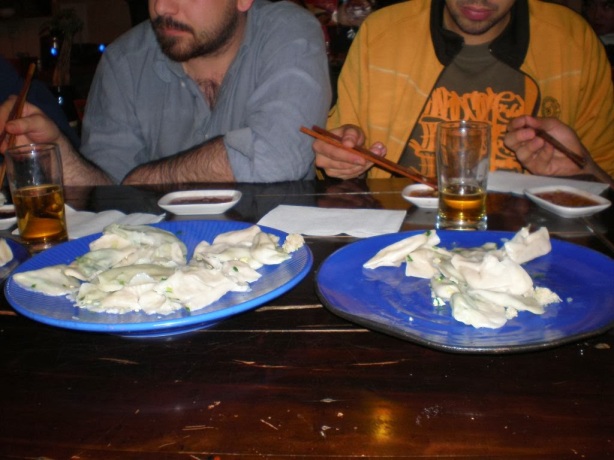 These ugly dumplings were probably made by me. 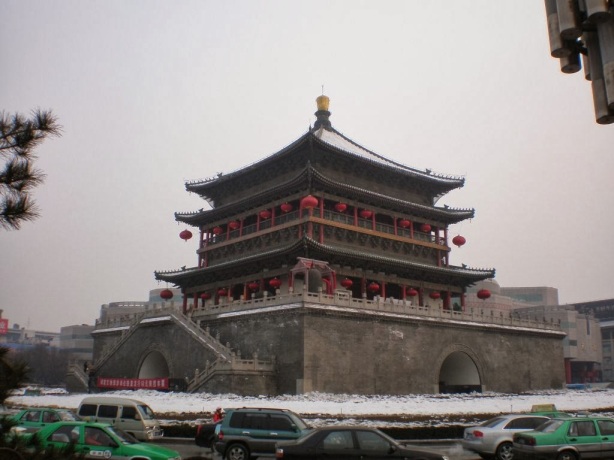 It is the Bell Tower! Thanks to Mike for pointing it out! 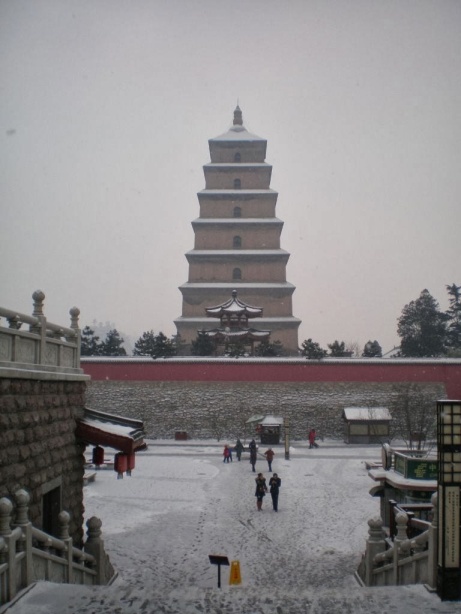 I think this was the Wild Goose pagoda.

From Xi’an we took the train back to Beijing. I don’t know how we managed to get tickets, everything was full, the square in front of the station was full of people lining up. That was the first time I said the famous sentence: I will never travel during Chinese New Year again!

← My Archaeological Adventure
How to get your driving license in China →

11 thoughts on “Back to the Past: My first backpacking trip”