Yesterday it was 清明节 qing ming jie, also known in English as Tomb Sweeping Festival. It regained its condition of National Holiday a few years ago and tomorrow I don’t have to work. Yay!

Qing ming jie is the festivity in which Chinese people visit their dead relatives in the cemetery and bring them money, gifts, food and alcohol. Money and gifts are in the form of fake paper money and paper gifts that have to be burned to reach the Otherworld.

C. has relatives buried in Suzhou and in a couple of villages close to Zhenjiang and Danyang. Yesterday we went to those villages with C.’s parents, grandma, uncles, aunties and cousins. We were a big group! It was my second time going to visit the tombs with them but this year was more special as his grandma came (last year she stayed at home, she is 80 something years old).

We had to get up at 5.30 (that hurts!) because C.’s family was scared there would be too much traffic on the highway. There was a lot of traffic anyway. It took us more than two hours to arrive to the first village. We greeted the relatives there (I still don’t know their relation to C.! He doesn’t seem to know either!) and went to visit the cemetery where grandma’s first husband is buried (C.’s grandfather was grandma’s second husband). The cemetery is surrounded by rapeseed flower fields. That yellow color really hurts the eyes!

Tombs in the countryside are a small mound with a gravestone in front.

Countryside cemetery. The flowers and colored papers are offerings to the dead.

Couples are sometimes buried together.

In the countryside people burn the offerings directly on the grave, but this is not allowed in the cemeteries in the cities. I will talk about that in my next post as tomorrow we are going to visit the tombs in the Suzhou cemetery. As I said before, fake paper money is burned for the dead. This money can be resembling the current paper notes or in the form of ancient ingots which according to wikipedia are called sycees.

Money for the dead resembling current paper money. 8 billion in just one note!

Ritual paper folded in the shape of ancient sycee or 元宝.

Some people also burn gifts for their dead relatives: cars, houses, glasses, ipads, mahjong sets… all made of paper, of course! Fruit and rice cakes can also be put in front of the gravestone as offerings, as well as beer or baijiu, which can be spilled around the tomb. Before burning the offerings everybody has to bow and put some incense in front of the gravestone.

The paint in the gravestone was a little discolored and C. repainted it:

After we were done we drove again for 30 minutes to another village where everybody has the same surname as C. (蒋 Jiang). In this village there are the tombs of C.’s great-grandfather and great-granduncle, but before going to visit them we had lunch with the living relatives, who organized a banquet in their house. I was sitting next to an old lady who I think was a distant niece of C.’s grandma who was telling me: “吃！吃！(Eat! Eat!)” every time she saw my chopsticks were not moving. I ate a lot.

After lunch, while the men were busy drinking all the baijiu they could find (luckily C. had the excuse of driving! Luckily no one knew I can also drive!) we went for a walk. It was a nice little village.

Finally, with the family men a little bit tipsy, we went to visit the tombs and did again the same ritual of bowing and burning the votive money. This cemetery was also surrounded by rapeseed fields. 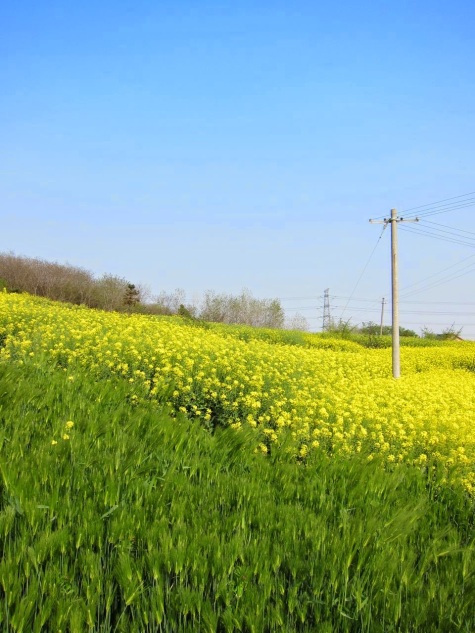 Before going back to Suzhou I suggested that we all took a picture together and everybody was very excited about this.

After the picture-taking session we said goodbye to the countryside relatives, who made us promise that we would be back next year!