Double 11 or the shopping madness

Chinese people love word games and giving meaning to numbers according to their pronunciation. Everybody knows number 4 is bad luck in China because it sounds the same as “death” (四 sì vs 死 sǐ), and 8 is good luck because it sounds similar to “getting rich” (八 bā vs 发 fā, 发 is the first character in 发财 fācái, which means getting rich). But there are many more numbers with a meaning. On January 4th, 2013, many Chinese couples tied the knot because 2013.1.4 (dates are written year, month and day in China) sounds similar to “love you for a lifetime” (爱你一生一世).

November 11 used to be an informal festivity for single people in China because it has many ones in it (11.11). I was first aware of its existence when I saw an advert on a Beijing bus tv. It seems the stick-shaped cookie Pocky was the sponsor of the festivity because their cookie sticks also look like “ones”, so the advert was more or less: “Eat Pocky on Singles Day!”.

But in 2009, Alibaba decided that it was time to get some money off this festivity. What could singles do on their special day? Well, go shopping, of course! So, from that moment on, November 11 became a day in which there are big discounts in online stores in Taobao, Tmall and other websites that also started doing the same (although Alibaba registered the trademark “Double 11” (双十一) last year and is threatening with suing any competitor who uses it!). 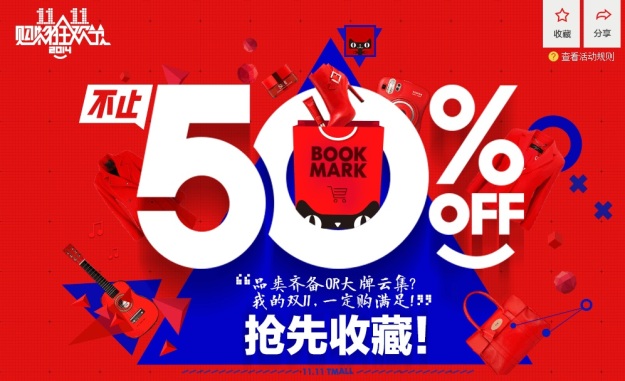 Screenshot of the Double 11 promotions in Tmall.

Chinese people love shopping and they participate gladly in the madness that happens every November 11. Last year, Taobao and Tmall sold 35 billion yuan on that day. That is 4.5 billion Euro, or almost 6 billion USD. Sold in one day.

So, what happens exactly on Double 11? Well, some days before the websites start announcing the huge discounts they are going to offer. Everybody gets very excited and starts looking for things they want to buy, and then buy them on November 11. Everybody wins, or so it seems. Taobao and the other online stores win for sure. The courier companies also win, it is probably one of their busiest days; normally when you buy something online it will arrive in 2-3 days but in November 11 you know it is going to take longer because they have billions of packages to deliver. But what about the customers? Do they win? In fact, everybody thinks that what the sellers actually do is just increasing the prices before the promotion starts, and then applying a discount to those increased prices. So the result is… you get the same price you would get in a normal day and you have to wait longer for your purchase to arrive.

But does anyone care? No, sir! Everybody loves online shopping! And what about me? Well, I think this year I won’t participate in Double 11. I don’t really need anything.

18 thoughts on “Double 11 or the shopping madness”