Living with a Chinese man

Sometimes I’ve heard or read that Chinese men are mama’s boys. That they can’t even fry an egg. That they are lazy and completely useless regarding housework. And then I look at C. and I think: “Am I the luckiest girl on Earth or are those stereotypes just a bunch of bullshit?”.

Fact #1: Many young Chinese people don’t do anything by themselves while they still live with their parents. Their mom does everything and this is not really a very good example for a child. But anyway, that’s how it is. The first time a young man or woman faces reality is when they go to university. In China, most students would move to live on campus, even if their university is in the same city they live in. And Chinese universities don’t have single or double rooms, that is a luxury only reserved for foreign students. Chinese students live in 4 to 8 people rooms with bunk beds. And that is when they need to start caring about tidying up, washing clothes, etc.

Fact #2: Despite what their reputation says, Chinese women have a temper. And young Chinese women these days are very demanding. Not only does their prospective husband need to own an apartment and a car if they want to have any chance with them, but boyfriends/husbands are also supposed to treat their girlfriends/wives like princesses. And princesses don’t clean, don’t mop the floor, don’t wash clothes and certainly don’t do the dishes. Ok, this is also a stereotype about Chinese girls. It is said that especially Shanghai girls are pretty fussy so Shanghainese men are supposed to be very docile and gentle, because they are dominated by their women.

So, how is living with a Chinese man? I can tell you my first hand experience!

– He always does the dishes

I don’t remember when was the last time I used a scourer. C. says he likes doing the dishes. I hate doing it because I get a backache, so I happily let him do it. And, does anyone else think that a man doing the dishes is actually a quite sexy sight? :D

He knows how to use a washing machine! And also hangs, folds and irons his clothes himself! (With the incredibly useful clothes steamer I mentioned once).

– He is learning how to cook… some things

None of us has much experience cooking. I can only prepare some simple Western dishes (my latest hit being Coca-Cola chicken wings, a recipe I found here). He is not much better, he can only cook some basic Chinese food. But after we got the rice cooker a few months he has started experimenting! At least he tries!

This is common to all men, no matter where they come from, right? They always want to go to Ikea so they have an excuse to take nails and hammer and annoy the neighbours for a whole afternoon! (Unless we are talking of the Ikea wardrobe from hell, of course! That is only for experts!). 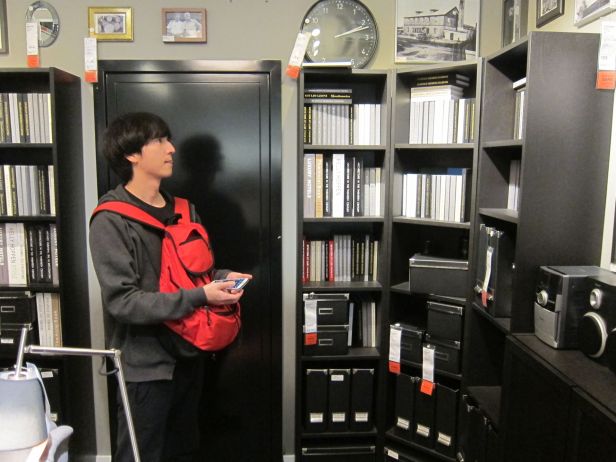 C. examining the book shelves that he would later assemble at home.

– He walks the dog alone when I’m feeling lazy

Normally we walk the dog together when I am in Suzhou. But sometimes it’s late. And dark. And cold. And I don’t feel like going out in my furry brown bear pajamas. So I tell him and he doesn’t get mad. He goes alone.

I had been waiting for an excuse to show you my bear pajamas because it’s very warm and cute! BTW, C. has a matching one…

– He does everything I say

In the sense of: I am already in bed and I tell him to boil water and prepare the hot watter bottle because I feel cold. Or I am in the sofa and I suddenly feel like eating chocolate but our kitchen faces north and the chocolate is in the drawer there and it’s oh so cold. He would bring it for me. Sometimes I expect him to get mad and say “Go get it yourself”, but he never does!

I can totally see that someone is going to point out that I am a lazy bitch! I am not, please don’t think C. is my slave and I spend the whole day lying in the sofa. It’s just that I never lived with anyone who would do these things willingly! Is this a common trait for Chinese men? Or did I win the jackpot? Girls with Chinese boyfriends/husbands, how are they regarding housework?

← My first time in Suzhou
My first Chinese wedding →

62 thoughts on “Living with a Chinese man”