I want to be honest with you. I am not a very active person. I have never been a big fan of sports. I don’t mind walking long distances, but that’s about it. I cannot understand why everybody is suddenly crazy about running. Ugh. With all that sweat. And my poor old-lady knees. Apart from not being very active, I love sleeping. Especially in the winter! Where can you find a warmer place that between the blankets? (Particularly if you live in the middle of China and your apartment is ridiculously cold in the mornings because of the lack of heating and proper insulation).

So you can imagine my horror when a couple of weeks ago, C. told me that he had signed us up for a 20 km bike ride with his colleagues. On a Sunday morning. At 9 am. “Well, 9 am is not that early”, that’s probably what you are thinking. But it was 9 am in a place that is an hour and a half drive from where we live. So I had to get up at 6:40. On a Sunday. Isn’t that a deadly sin?

However, in China people are used to getting up early. Maybe the fact that the sun rises absurdly early has something to do (in June, the sun rises at 4:30 am in East China). Mainly the problem comes from the fact that this country only has one time zone, when based on its territory it should be divided in 4, at least. But country with the same time zone, united country, right? That must be the official reason.

The bike ride was C.’s office team building activity. We were split in teams of 6 people and we had to ride 20 km around Tai Lake, stopping in some points along the way to complete some tasks. The tasks had to be done when the whole team arrived, so if you were super fast you still had to wait for the rest of the people. The first task was taking a picture of the whole team in front of a temple next to the road. The second task was finding some hidden object in the second stop. I thought I was going to die because I am definitely not in my best shape and I had not been on a bike for something like one year, but it was way better that I was expecting. I didn’t even have stiff legs the following day! My buttocks were in pain, though. Why are bike seats so uncomfortable?

We had all to wear a yellow t-shirt provided by the company, and luckily we didn’t have to bring our own bikes. 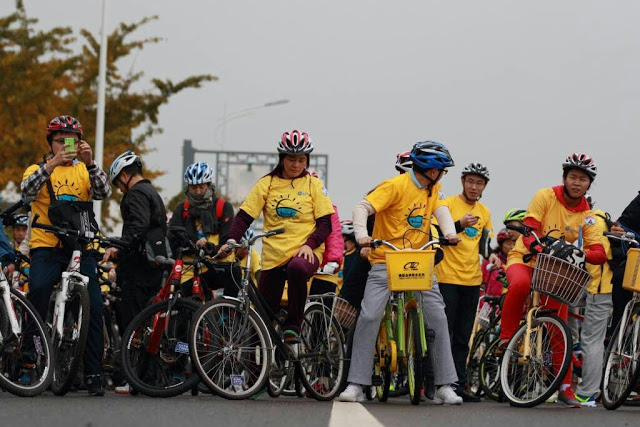 Waiting for the race to start.

All the pictures were taken by C.’s “secretary”. I didn’t even got my camera out of my bag…

Fortunately the cold had not started yet. It was the last non-freezing weekend of this year, but I still wore a lot. Better safe than sorry.

Not my best pic!

Waiting for the rest of the team in the second stop.

Our team didn’t win. Boooh! But at least we got a free lunch with everybody. 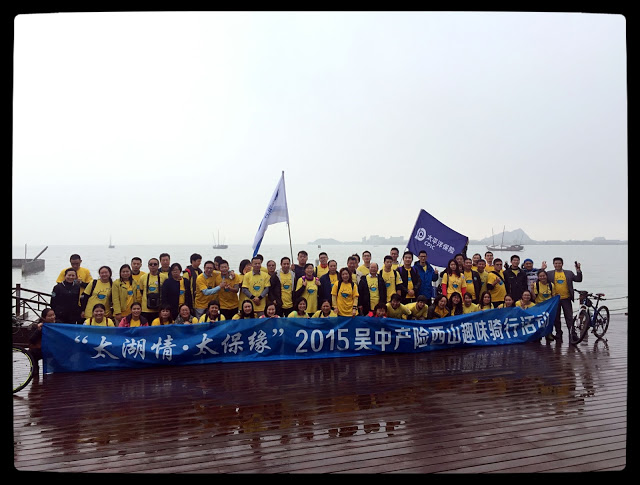 Posing by the lake.

Does your company organize team building activities? Would you be ok with that if they were on a weekend?