Japan! So close to China and I had never been there! But last summer, after buying super expensive tickets to go back to Spain in October, I decided I would not be ripped off again for Chinese New Year holidays, found a decent offer to fly to Osaka and booked my trip six months in advance. That is the only way I have found to avoid paying ridiculous prices during the Chinese holidays.

I know there are many people completely in love with Japan, even when they have never been there, as Japanese culture is very popular. I used to watch some Japanese cartoons when I was a kid, but after growing up I was not interested in anime or manga. So when planning this trip, I realized I had no idea what I could see or visit! I didn’t know basically anything about Osaka and Kyoto, the cities I was planning to visit. Yes, I am ashamed of myself. Luckily the internet helped me with its great resources! I also used this app called Tripomatic which allows you to mark places of interest and shows them all in a map.

We flew with Japanese Airlines and it was a great idea. The food was actually good! Food in Chinese airlines is always on the nasty side. Besides, when we were leaving for the runway I noticed that the ground personnel were bowing at the plane! I had never seen this before so I am pretty sure they only do it for Japanese airplanes! But I forgot to check if they also bowed when we came back from Kansai airport… Can anyone confirm if this is done in Japanese airports?

After arriving in Kansai airport and queuing for one hour to pass the passport control, I was greeted by a customs official who took my passport, examined my Chinese residence permit and asked me in Spanish: “¿Vive en China?” (Do you live in China?). This was in the “nothing to declare” gate and he didn’t even open C.’s passport, so I am sure he was only looking for an excuse to practise his Spanish! It was fun, though. I know many Japanese people are interested in Spanish culture and I actually saw some hotels and restaurants with Spanish names.

But let’s turn to the juicy details! What did we do and see in Japan?

We spent the first day and the last two nights in Osaka. Osaka is a vibrant city famous for its snacks. We stayed in the area around Juso station, which had a good side and a bad side. The good side was that it was full of small restaurants and also pachinko salons and “relaxation clubs” for businessmen (I put these in the good side because I thought it was interesting to see them all). The bad side was that Juso station only has one train line which goes north, and due to the complicated transport system this meant we had to pay extra every time we wanted to go to downtown Osaka. 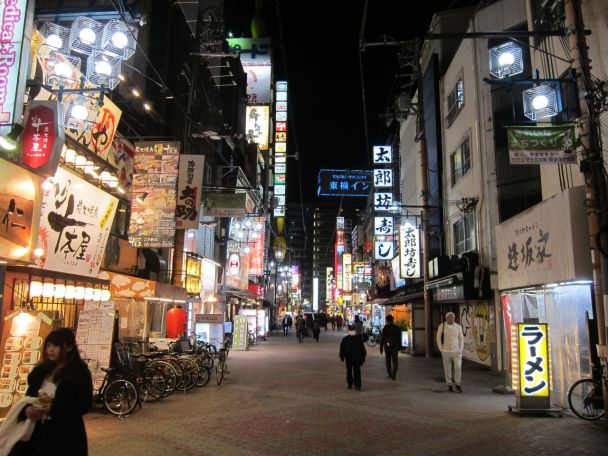 In Osaka we visited the Osaka castle. The castle itself is not very interesting as it is completely renovated and you can only see some exhibitions and a few objects inside. The outside gave for nice pictures though, and the park around it was very entertaining, full of kids playing baseball, elders enjoying the flowers that were just starting to bloom, and a kendo school where a competition was going on and we could see the students fighting with those incredible suits and masks. After lunch we went to the nearby History Museum and in the evening we strolled around the Dotombori area, a cluster of commercial streets where all the Chinese tourists were buying the whole country away. 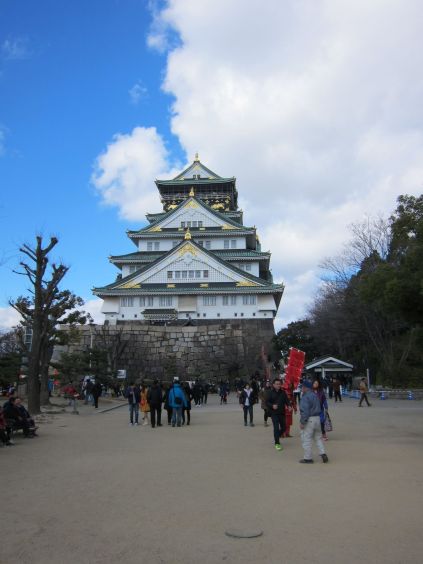 The next day we went to Kyoto, where we spent the next 2.5 days. Moving between nearby cities is very easy and convenient thanks to the train system. Kyoto is a gorgeous city, very quiet and laid back. I would have loved to rent a bike but we walked a lot, which was also fine. We visited the Manga Museum (it is basically a library with thousands of manga tomes, most of them in Japanese but they also have a small section with other languages), the Pontocho alley, the Fushimi-Inari shrine, and several temples. Because if there is something in Kyoto, that is temples! They are everywhere! If you are interested in wearing a traditional kimono, there are many shops which rent them for the day and then you can go and take pictures in all the temples. Many Chinese and Taiwanese girls were doing this. 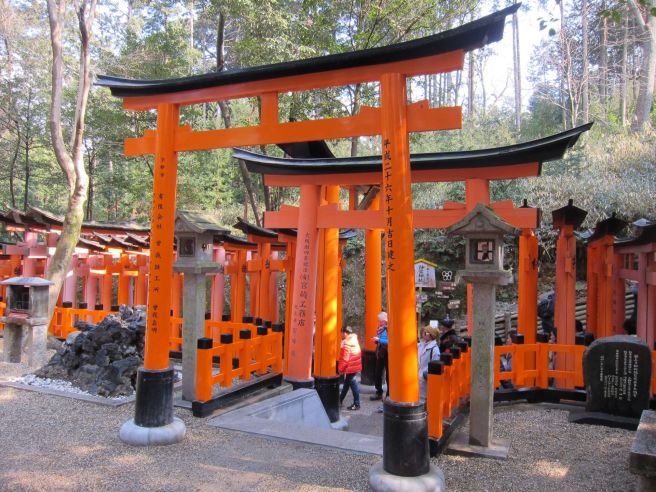 Fushimi Inari is famous for its red gates 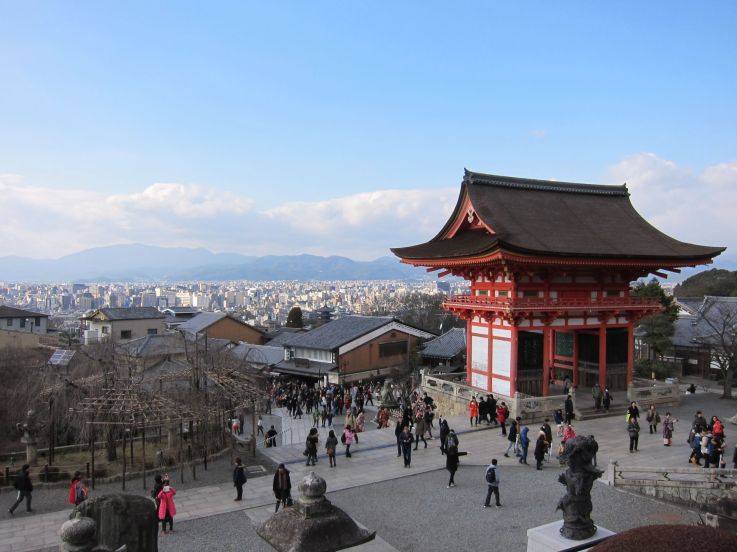 Kyoto from the top of a hill 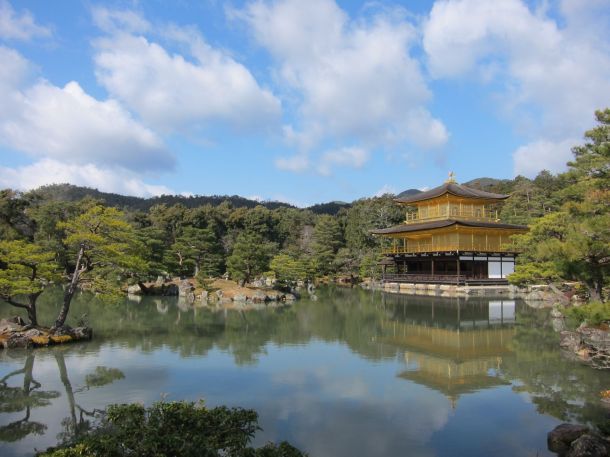 One of the nights in Osaka we met with my Japanese classmate from my student times in Beijing. He and his girlfriend treated us to dinner in a hidden bar and then took us to a drugstore and recommended some lotions and medicines that all Chinese people buy when they go to Japan!

The last day we did a day trip to Nara. The most famous place there is probably the park where a lot of deer live and tourists can go feed them and take pictures with them. There is a special kind of cookies for sale which is the only thing that you are supposed to feed the deer, but they reminded me of my dog in the sense that they would eat anything, even the paper covering the cookies… In Nara we also visited, guess what, more temples! 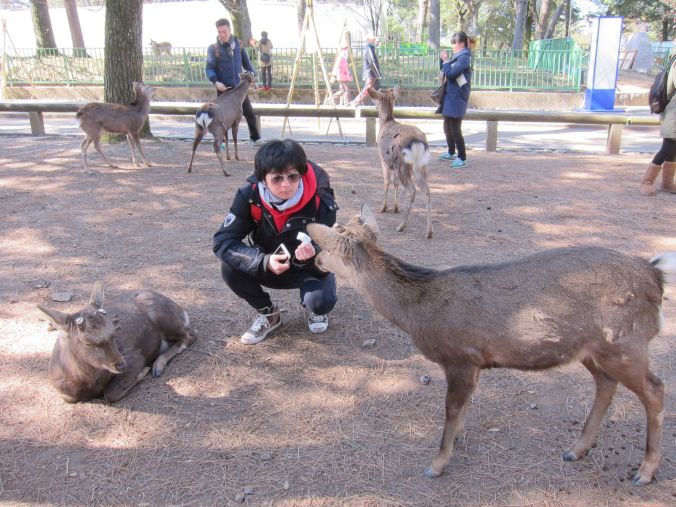 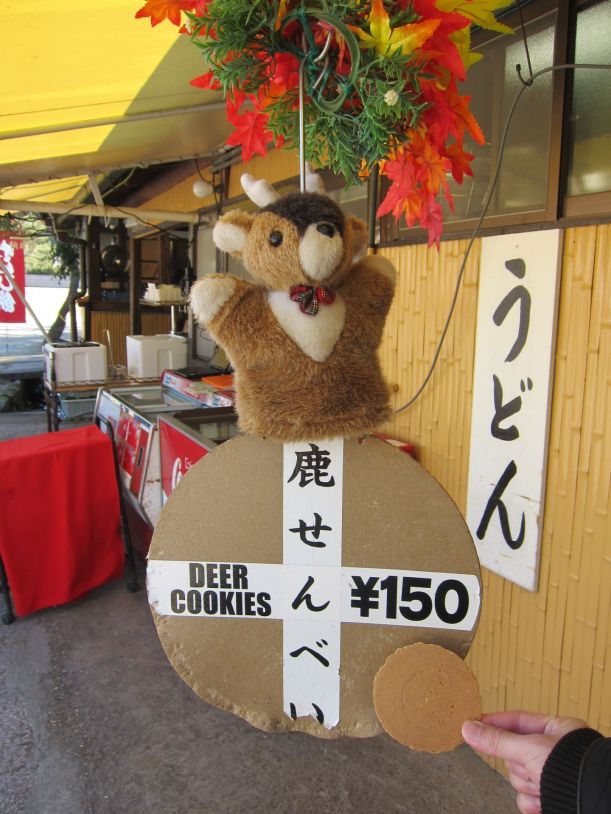 Deceptive advertising! The deer cookies were not that big!

Before leaving Japan, one important thing to do was visiting a supermarket. I always try to visit markets or supermarkets everywhere I go. The Japanese supermarket didn’t let me down and prices were not expensive, for sure much more affordable than the expat supermarkets in China. Real bread and tasty pastries and cakes were also readily available, and chocolate tasted like real chocolate (that is one of my main complaints regarding China). And of course I had to try Japanese matcha before leaving! 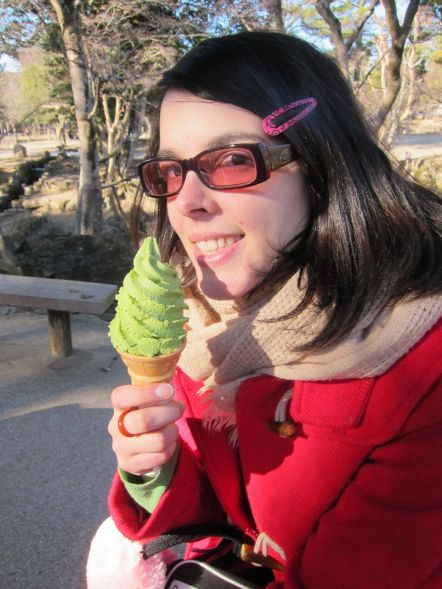 I’m not a big fan of the matcha ice cream, but the matcha latte was nice.

I hope you also had a good start of the year of the monkey!

← The Year of the Monkey
“Have you watched Pretty Woman?” →

37 thoughts on “Holidays in Japan”