In October 2008 I was studying Chinese in Beijing Foreign Studies University and we got one week of holidays for the National Day. What to do, where to go? When holidays were approaching there were always some people from a tourism agency handing out catalogues for the students. They arranged trips to many places in China, from 2 days in Chengde, Hebei province, to a full week in Tibet or Yunnan. We decided to give it a go and chose a short trip to Inner Mongolia.

Inner Mongolia is a huge province in the north of China. We took the night train from Beijing to Hohhot, its capital, where we arrived in the morning. What is there to do and see in Inner Mongolia? Well, this province is more about natural landscapes than about cities, so we spent one day in the grasslands, one day in the desert, and right before taking the train back we visited a temple in Hohhot. 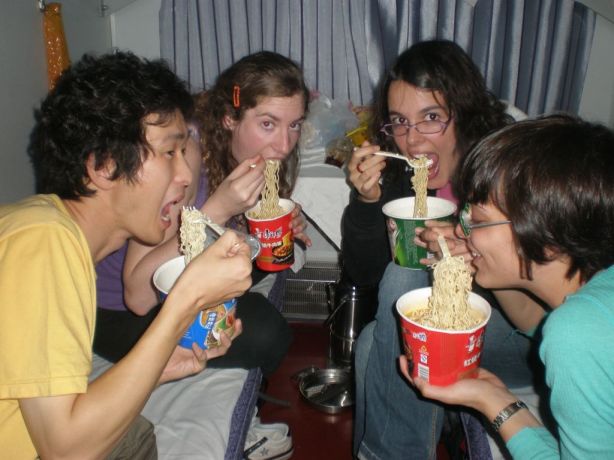 Slurping instant noodles is a must when riding a Chinese train.

The grassland we visited were halfway between Hohhot and Baotou (another city). It was a village especially built for tourism, with small round houses imitating the Mongol yurtas. 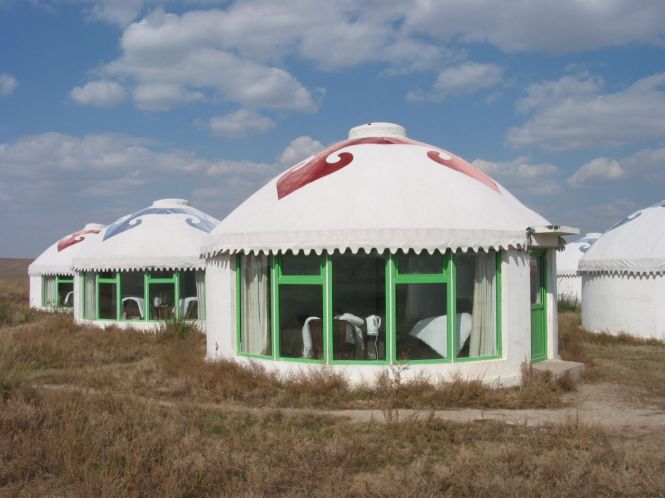 The houses/rooms didn’t have an ensuite toilet and everybody had to use the communal toilet. Which was… how to say it… very rustic. It was a separate house with a few holes in the ground. That was it. If you looked down when doing your business, you would see a brown swimming pool! 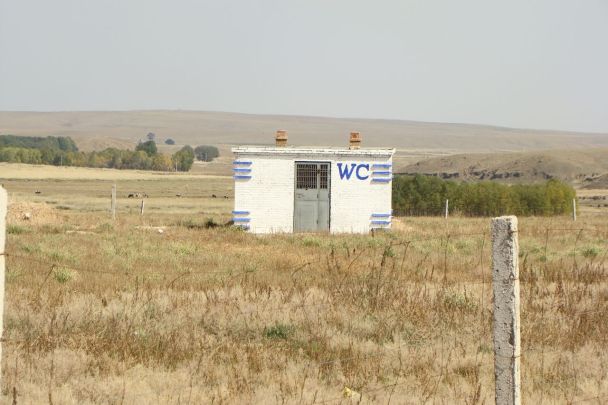 What can you do in the grassland? Well, not much. You can enjoy the clean air and take a walk. But we were in an organized tour, so they arranged activities for us: first we rode horses for a while (I still remember the butt pain!), then we went back to the village for lunch. The star of the meal was a grilled whole sheep. We were also offered a shot of a very strong liquor, ceremoniously handed by a young man with a white scarf on his hands. In the afternoon we were taken to visit a local family house (it was a normal house, not a yurta) where we tried Mongolian milk tea (it is salty! I liked it) and were taught a few simple words in Mongolian (I can’t remember any of them now…). In the evening, after dinner, the tourist village had a bonfire and performances. 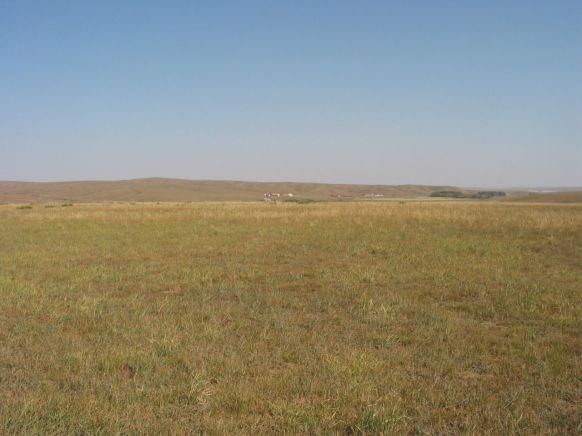 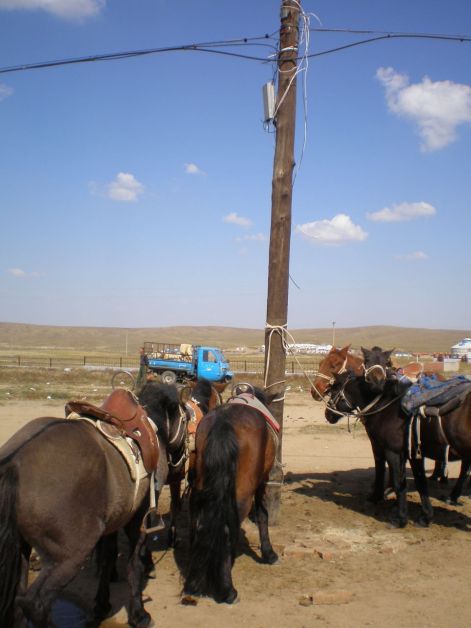 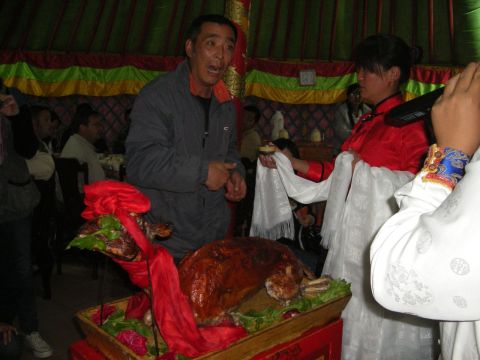 The poor (but delicious) grilled sheep and a Chinese tourist with a very weird expression.

I remember well the extreme weather. During the day it was nice and warm, but at night it was so cold! Fortunately we were smart enough to bring the down jackets, even though in Beijing we did not need them yet. It was also very cold inside the yurta/room. 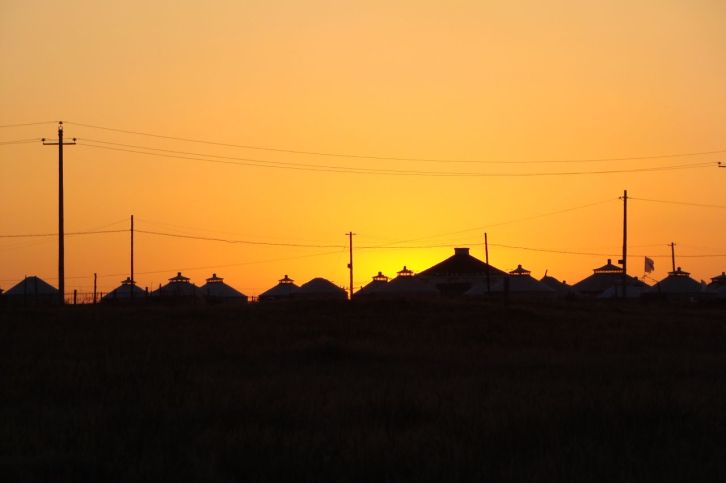 Sunset in the grassland.

The next day we drove to Baotou to visit the Gobi desert. We were only on the edge of the desert, but it was extremely cool. It was also scary to see that the desert is not a motionless entity, the huge sand dunes keep advancing and covering more territory. The agency also organized some activities in the desert, like camel riding or paragliding (pulled by a car) but these had to be paid apart so I spent the time just walking around and taking pictures. We had to wear some kind of high cloth boots on top of our shoes to avoid getting full of sand! 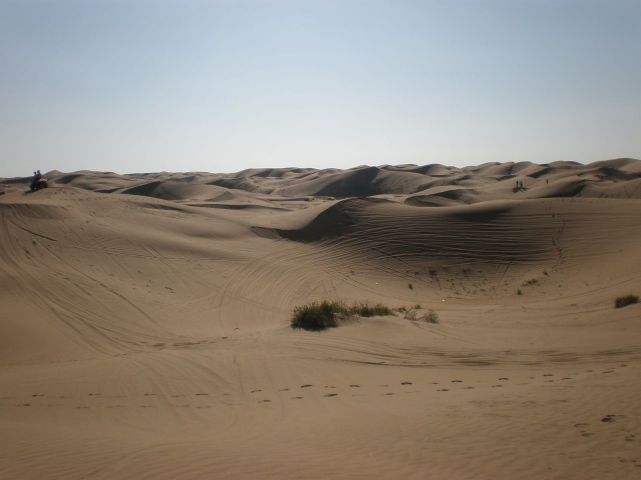 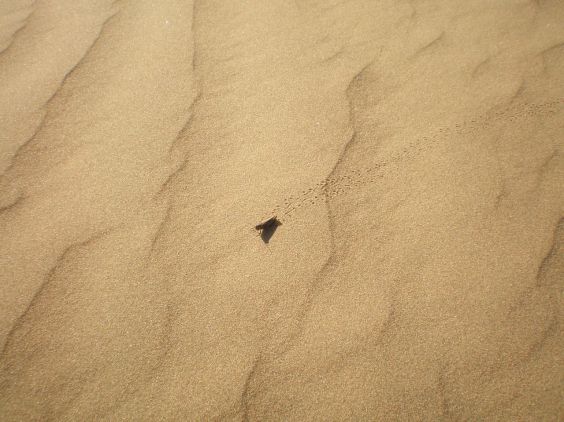 Even insects leave footsteps in the sand. 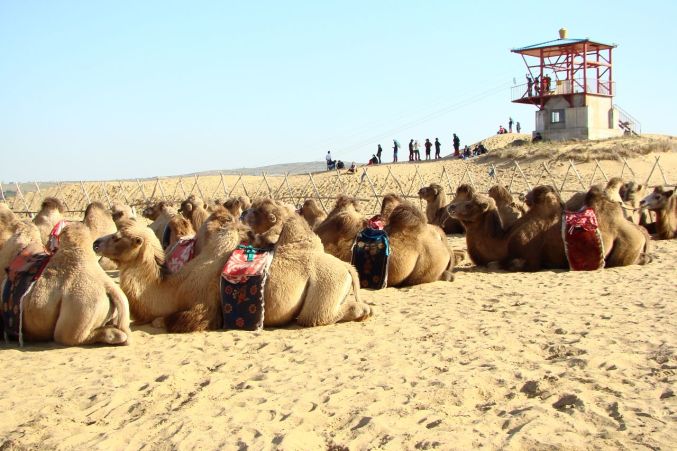 In Hohhot we only stayed for a very short time, so I only rememeber visiting this temple. It looked basically the same as the temples in Beijing. There is also a museum with dinosaur skeletons in Hohhot but we didn’t visit it. That’s the bad side about travelling in an organized group… you cannot choose where to go! 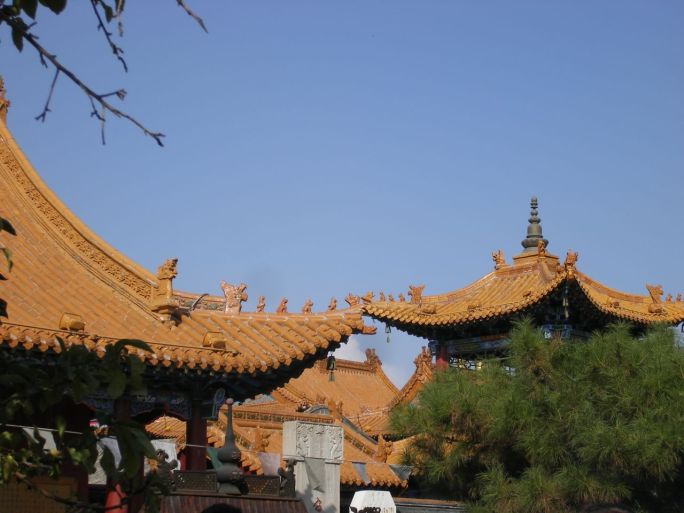 It was an interesting trip because we went to places that I had never been to, like the grassland and the desert. It would be extremely cool to do a road trip though Inner Mongolia, driving your own car, but now that I live in Suzhou it is a little bit too far to drive up there!

← Book review: The Moon in the Palace
Spring →