A few weeks ago, my neighbour (she is also my friend) sent me a WeChat message. “Do you want to be interviewed for the Eslite magazine? We are looking for an international family for our next issue”. Eslite is a Taiwanese bookstore (it’s called 诚品 in Chinese) and they opened a fancy mall in Suzhou a few months ago. My neighbour is a graphic designer and she works in their marketing department.

“Ok”, I said. “Why not?”. Then she sent me the questions we would be asked so we could prepare our answers in advance. I also got a word of caution: “Don’t reply saying something that love conquers all or the interviewer will kill you”. I got a bit scared the interviewer (another girl from her office) would not be satisfied with our answers, so I made a mental note of talking as much as possible so she had material to pick.

On the day of the interview, we  went to the Eslite mall. The interviewer was not as scary as I had thought, it’s just that she had interviewed other international couples and they had replied mostly with monosyllables, so she was a bit tired of wasting time. The interview was more like a conversation, it lasted for around an hour and I talked most of the time, much more than C.!

Then, after a few days, a photographer came to our apartment to take the picture that would appear in the magazine. It took another hour, he took dozens of pictures and in the end only one was used!

The photo that was finally used for the magazine.

Nico appeared in some pics, but she didn’t make it to the final selection!

Do you want to read the interview? It was finally published last week and you can grab a copy in the Suzhou Eslite mall. The longer version is also available online here. It’s only in Chinese! If you can’t read Chinese you are not really missing much, as many of the topics appear on my blog: how we met, how it was when I met his parents or the fact that he wanted to buy a leather sofa for our apartment (over my dead body!). There are also other things I might write about in future posts, like China’s alcohol culture and how people here make everything a competition. 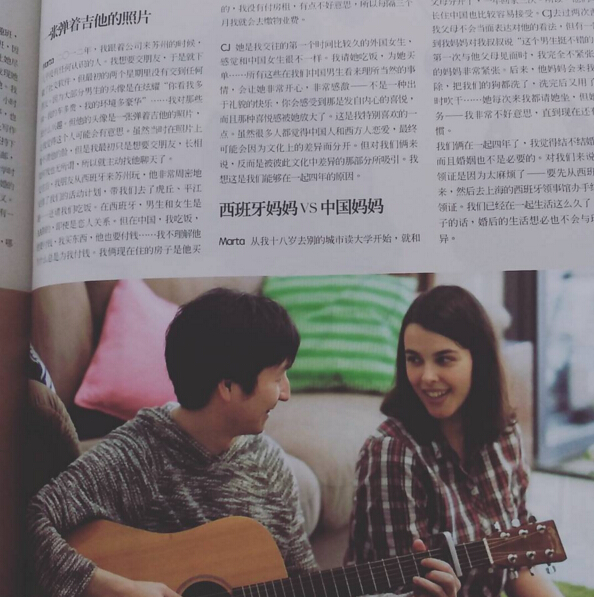 After reading it, C.’s mum  started asking when we are going to get married and start thinking about the “big issues in life”. Aaaargh!

← A rock & metal festival in China
Book review: Up to the mountains and down to the countryside →

27 thoughts on “Interview in Eslite magazine”