Today is my Chinaversary! On September 5, 2006, I set foot in China for the first time in my life. Fast forward 10 years and I’ve been here over 8 of those years! If someone had told me back then, I don’t think I would have believed it! After all, I only intended to stay for one semester.

What have I accomplished during this time? Let me recollect…

In 2006, when I first came to China, I had an online journal in a website called Fotolog. This is the first picture I published from Beijing: 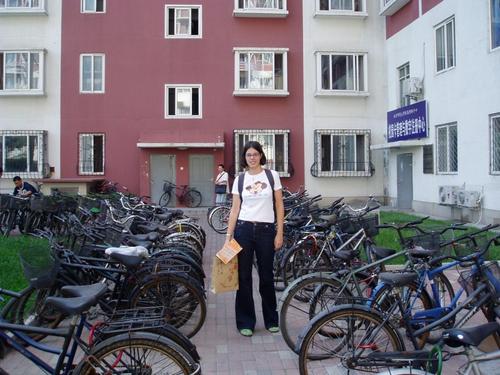 I had never seen so many bikes together.

On that first entry I mentioned that people stared at us on the street (I came with a Spanish friend) and that CDs were very cheap. During those first days I also found out that instant noodles are not cooked in the microwave oven (you just pour boiling water inside) and that drinking in bars is not cheap. On other entries I mentioned the school in front of the dorm, where they would exercise with very loud music at 7 am every day, and I also noticed that most tv shows were either historical dramas or singing contests. It’s still like this 10 years later!

The view from my first room in China.

I’m very glad I wrote that online journal and that it’s still available, so I can review my first impressions of China ten years ago. Overall these ten years have been positive and China has treated me well!