Finally! All the stress and preparations ended and I can at last take a rest in 2017! This was a very eventful year, between our two weddings and what worried me the most, the family trips. As you surely remember, my family came to China in May to attend our Chinese wedding and I documented our itinerary in several blog posts. Then in October, C.’s parents and four of his friends went all the way to Spain to attend our Spanish wedding. I will write about our trip in the next few days, but today I want to tell you everything about our Spanish wedding. Spoiler alert: it was amazing!

I think I have mentioned it several times already, but I’ll say it again. I never had any dreams of my “perfect wedding” or anything. I basically never thought of how my wedding should be until I saw myself in the situation of having to organise it. The only thing I knew was that I wanted an outdoors wedding, and I was lucky enough to find the perfect place both in China and in Spain. In Spain, wedding venues are booked more than one year in advance so I couldn’t believe my luck when the venue I had fixed my eyes upon told me they were booked for September 30, 2017 (my first choice for the wedding date) but that October 7, 2017, was free because they just had a cancellation. That’s how the date and the venue were decided, over a year ago. The chosen place was a small castle 10 kilometres away from Cáceres, my hometown, and which is called Castillo de las Seguras. It belongs to some aristocrat family who works together with a catering and rents the castle for events.

Right now I don’t have pictures of the morning of the wedding day, when we were getting dolled up and dressed. The official photographer took those and I will still have to wait at least a couple of months to receive those pictures. But I can say that it was quite a relaxed atmosphere and I was not nervous at all. The hairdresser and the make up artist came to my parents’ home and worked on me, my mum and C.’s mum. They finished super fast so I still had time to sit around and check my phone. A friend who could not attend because she had another wedding that day sent me a beautiful bouquet and I received it that same morning. As the starting time got closer, my brother drove C. and his mum to the castle and I left a few minutes later with my dad, my mum and C.’s dad. Most people in Spain hire antique cars to drive to their wedding venue (they look nicer in the pictures) but I decided to save that money and splurge on other things, so I arrived to the castle in my dad’s Volkswagen.

The ceremony was performed in the garden of the castle. And here we had a surprise for the guests! The master of ceremonies was no other than my aunt! We had been preparing the script for the ceremony in secret and almost no one knew it was going to be her. Although I gave her the basis for the script, she added many things and it was a beautiful ceremony. Another one of my aunts had prepared a speech, my brother’s girlfriend read a passage from The Little Prince (the one about taking care of your rose) and three of my younger cousins read a poem in Chinese, Catalan and Spanish. During the whole ceremony we also had live music (piano, flute and voice) performed by a fantastic duet (C. entered the ceremony to the rhythm of Bruno Mars’ Marry You!). It was a truly beautiful and emotive ceremony and I was tearing up all the time. Luckily I was not wearing my glasses so I didn’t see many of my guests were crying too! But they told me afterwards. Even people that basically didn’t understand a word, like C.’s parents (the ceremony was in English and Spanish), were overcome by emotion when they saw my cousin’s hand tremble while reading her poem. I had not prepared my vows beforehand and that same morning I had an idea: What if I sang some verses of I Will Follow You Into the Dark by Death Cab for Cutie, a song that C. sang to me when we first met? I think my voice broke but I did it, there in front of everybody. C.’s vows were absolutely beautiful and a friend that doesn’t speak English told me that she didn’t understand a word but she cried anyway because of the way he was speaking. I had previously thought the ceremony would not be too emotive, because after all we were already married, but I was wrong. It was super emotive and original and everybody loved it. It ended with the song Save Your Kisses for Me and my aunt asking all the guests to kiss their partners or friends. And rice rained on us, of course. It is a Spanish tradition to throw rice on a newly wed couple after the ceremony to wish them fertility… 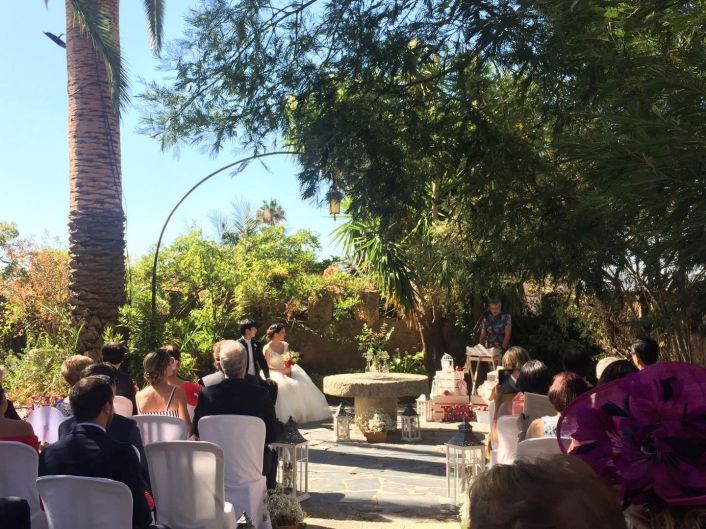 After the ceremony it was time to take some pictures and eat some snacks in the garden. We had a table with several types of cheeses, a waiter cutting a leg of Iberian ham on the spot, and small bites that were quite yummy. I wanted to eat all of them but I think I missed some as I was very busy chatting with all the guests! Then the proper lunch started and we entered the dining room to the beats of Dime que me quieres, by Los Piratas. It’s a rock song so everybody was cheering! I completely forgot we were supposed to drink a glass of champagne when entering the dining room, the poor waiter had to run behind us and we ended up drinking it at our table. The food in the lunch was also very good although at this point I was already quite full! During the dessert I went around the tables giving each guest a badge with a funny sentence. I laughed a lot with this because I was trying to choose a badge that really went with each person’s personality. For example, my friend who always wears beautiful clothes and accessories and has a perfect make up got the “I’d rather be dead than plain” badge; my brother’s girlfriend got the “I would totally kill for the bouquet” one; C.’s mum got one that said “I know secrets about the groom that I cannot tell anybody”, etc. 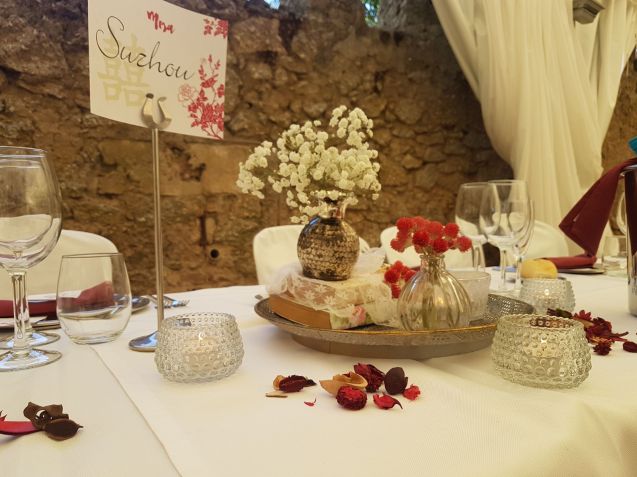 In China, weddings finish after you are done eating, but that’s not the case in Spain. There was still half wedding left and now it was time to dance! In a separate room of the castle we had a dance floor and a dj with a list of songs my guests had asked for. I think we danced for like 5 hours. C. and I did a choreography we had prepared (to Jamiroquai’s Canned Heat) and everybody loved C. because he really took it seriously. My cousin and her boyfriend also performed a lindy hop dance and the rest of the time everybody danced together. During the dance party there was also an open bar, I don’t know if this is common in other countries but it is in Spain. I suck at dancing and I don’t drink alcohol but I had a great time with everybody! At around 10 pm more food started coming, in the form of another ham leg, meat and cheese sandwiches, and hot soup. You would’ve thought we were so full we couldn’t eat one more bite, but we still ate, haha.

Most of the guests left the party at 11 (considering we had started at 1 pm it was not bad at all!) but the open bar was booked until 1 am, so several of my friends stayed. As we were already tired of dancing, we just sat in the garden as the weather was perfect (in fact, the weather was so summer-like that I got a sunburn during the ceremony!).

Sneak peek at one of the pictures that the official photographer took! This was right outside the castle. 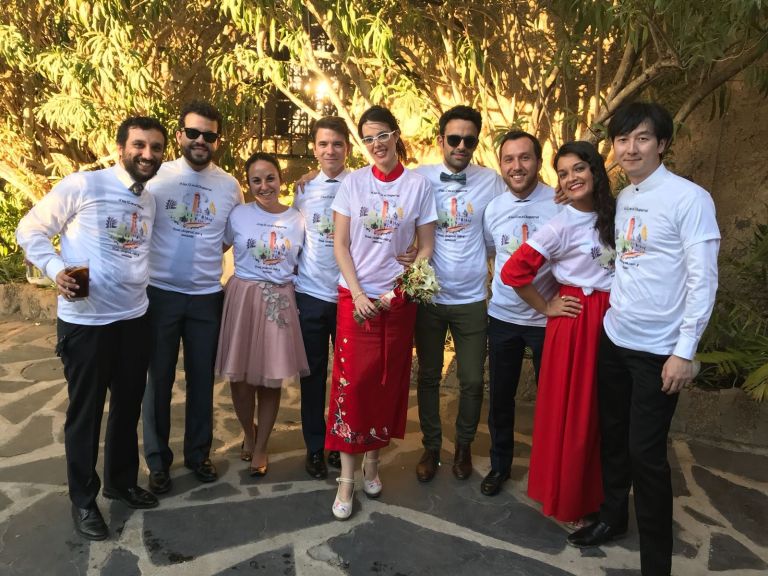 My friends from Seville gave me a surprise and made these t-shirts remembering our summers in the beach.

With some of our gorgeous guests.

With my aunt, our master of ceremonies. She did a great job!

I absolutely loved my wedding. I was not stressed or nervous at all. There was no plan to follow, so I was not worried about “now we have to do this and later that”. Everything just felt natural and spontaneous. Many of the guests didn’t know each other as I had friends coming over from many different parts of Spain and even from other countries, but they got along super fast and I didn’t have to worry about someone being alone in a corner. I had guests attending that I had not seen in years and I felt so happy that they took the time to be with me on our special day, even though some of them had to take a plane or drive for 8 hours.

It was the perfect wedding! I can’t wait to see the photographer’s pics!

40 thoughts on “Our Spanish wedding”