I follow the official account of the China Daily newspaper on WeChat, where they share 2-3 of their news pieces and articles every day. Today the main article was titled: “Xi: All aboard internet express” and I went to read it (you can find it here). Turns out these days the Fourth World Internet Conference is taking place in Wuzhen, a water town not far from here, and Xi Jinping, China’s president, talking about the internet, said this:

“China will never close its doors. They will only be opened wider and wider going forward.”

You can see in the link that I am not making this up, it’s there, in the third paragraph after the sub header in bold. You also see it, right? It is not a product of my imagination. After reading it, I can’t help but wonder if Mr Xi missed the Sesame Street episode where the words “open” and “closed” were explained, or if he is using some kind of weird rhetoric in which what you say is exactly the opposite of what you mean (wait, that’s sarcasm, right?). Or maybe when he said it he was doing air quotes with his fingers when pronouncing some of the words, like this:

China will never “close” its doors. They will only be “opened” “wider” and “wider” going forward. 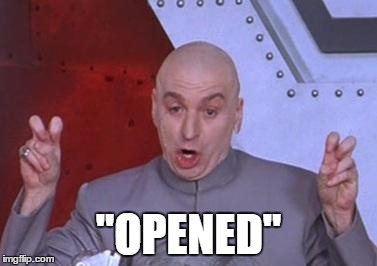 There, I fixed that for you!

When I am in Spain, what do I do when I turn my phone on in the morning? I check my mails in Gmail, see if I have any new messages on Whatsapp, have a look at my Facebook and Instagram feeds, read the newspaper… all of them normal things, right? Except, I cannot do any of that in China if I don’t connect to a virtual private network first, because all of those websites are blocked and cannot be accessed from here. So, what exactly does he mean with “China will never close its doors”? They look pretty damn closed to me right now.

The Chinese internet is completely different from the West’s internet, as any foreigner who lives here knows. Every popular foreign website has its Chinese equivalent: WeChat is the Chinese Whatsapp, Weibo is the Chinese Twitter, Renren used to be the Chinese Facebook until everybody started using WeChat and replaced it… This, in itself, is not bad. In Spain we used to have our own social media site, called Tuenti, which was not used in other countries; Russian people are all in VK instead of Facebook, and Koreans use the portal Naver, which is unknown abroad. The difference with the Chinese situation is that the Spanish, Russians and Koreans are free to choose which website they want to use; for the Chinese this is more difficult as the foreign sites are blocked. They can access them if they really want to, but for most of the population that doesn’t really make sense. Why take the trouble to get a VPN and access Facebook, when all your friends are using the Chinese sites? And why are they using the Chinese sites? Ten years ago, many Chinese people had Facebook profiles. Then it was banned in 2009 and I remember my Chinese teacher saying that something in her computer was broken, as she couldn’t open Facebook anymore. Now I guess she doesn’t even remember about it, as most social media activities in China are done through WeChat. In fact, I think the government doesn’t even need to actively block the foreign websites anymore, as most Chinese people are already used to the Chinese ones and wouldn’t bother to change. A couple of months ago, when Whatsapp was blocked, many comments read: “Why would you even want to use Whatsapp anyway? WeChat is so much better”. There, totally missing the point. If you check the answers to the question “Why is Facebook banned in China?” in Quora, it turns out many Chinese people agree with censorship and with being treated as children who need adult supervision. Or at least they say that in a foreign website, because for many Chinese any foreign criticism against their country or their government is seen as a personal offence.

The use of VPNs is a grey area. Officially it’s not legal (which means the aforementioned newspaper China Daily is breaking the law, as they have a quite active Facebook profile) but until a few months ago not much had been done against it, apart from disrupting the operations of some of the most popular VPN services before and during national events. Every foreigner in China knows that when the Communist Party has an important meeting, the internet will be slower and crappier than usual. Then a few months ago, the VPN apps were removed from the Chinese Apple store (I’m actually surprised they were there before) and a man was jailed for selling VPN connections. There were also unconfirmed reports by a foreign newspaper saying that starting in February 2018, the government would actively stop people from using VPNs, by having the internet providers cut the connections that were using them. I find this hard to believe, first because when the government decides something like that, it just does it and doesn’t announce it months in advance, and second because it would be a stupid move economically speaking. Many businesses, foreign or local, need VPNs to connect remotely to their servers.

A decade ago, the blocks on foreign websites were almost always temporary. When I arrived to China in 2006, Wikipedia and the BBC were blocked, but they were unblocked a few months later. However, since the rise of social media, blocks seem to stay forever. YouTube has been blocked for 9 years, Facebook for 8, Instagram for 3, Google I can’t remember for how many… Even the website of a Spanish newspaper has been blocked for 4 years and, coincidentally, it happened after that newspaper published a report detailing how the family of Wen Jiabao (the previous prime minister) had made a fortune during his tenure.

I’d like to say I hope things will change, but I don’t really think they will, at least not for the moment. Until they do, let’s hold on to those VPNs while they still work!

28 thoughts on “Internet censorship in China”