Writing a post about the books related to China I read during the year has become a tradition on this blog! I made these lists in 2015, 2016 and 2017, so 2018 couldn’t be any less! However, as I mentioned in my last post, in 2018 I was quite busy reading books about pregnancy, birth and breastfeeding, and then I went on to finish the whole Harry Potter saga, so… I only read 4 China related books!

According to Goodreads, where I register all my readings, in 2018 I read 34 books (in English and Spanish) and 5 comic books, and my total page count was 14606. I read more than in 2017 (when I was busy organising weddings and trips) but less than in 2016, which was my most prolific reading year so far.

So, without further ado, this is the (very short) list of the China related books I read last year:

In 2017 I read Chronicle of a blood merchant and Brothers, by Yu Hua, and I really enjoyed his style, very direct and unrefined, even garrulous sometimes. To Live is probably his most famous novel thanks to the movie adaptation directed by Zhang Yimou. However, I remember the movie as a very sad and teary drama, and the book is not. Like the other two novels I read from this author, the dramatic events in the story are often mixed with funny and awkward elements, so you cannot help but laughing at some of the characters’ misfortunes (watching the movie I only felt like crying all the time). I felt as if the book and the movie were completely unrelated, even though they depict the same story, because the feeling they project is different. And even though I love Zhang Yimou, I very much prefer the book in this case. To Live tells the story of Fugui, a man that manages to lose all of his family’s wealth and is forced to live in misery during the Civil War, the Communist liberation and the Cultural Revolution. Highly recommended. 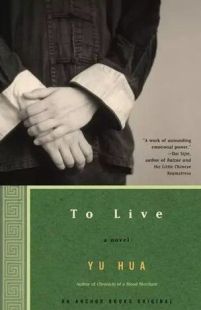 – Life and Death Are Wearing Me Out, by Mo Yan

Another author that I met for the first time in 2017! Life and Death Are Wearing Me Out is about a rich landlord who is stripped of his land and executed during that time in China when wealthy people were the enemy. He goes to hell but never confesses to any wrongdoing, so Lord Yama (the Chinese version of Satan, I guess) sends him back to Earth, where he is reborn several times as different animals and witnesses the changes experimented in his village since the 1950s. The book is a bit long but very funny and original and, according to Wikipedia, Mo Yan wrote it in only 42 days!! (And I can’t even manage to write one blog post per week… hahaha!).

An account of the author’s travels by train in China in the 1980s. In the old green trains, of course, no high speed trains back then! To be honest, I don’t remember much of this book… I think he visited many places, for some part had an assigned government official accompanying him everywhere (like in North Korea, ha!) and he was quite negative about many things.

I think this book has not been translated into English. It’s called The Chinese Box and it’s a historical fiction about a young Spanish man in the 16th century who travels to China with a secret mission from the king. Did you know that the Spanish king Philip the Second wanted to conquer China and convert its people to Catholicism? Right now it sounds like a laughable idea, but back then Spain was a powerful empire… and didn’t know much about China, so they thought it was feasible.

What did you read in 2018? Any recommendations for my ever growing China-related book list?