A stroll around Soochow University

Soochow University is one of the oldest universities in China and it’s located in the heart of Suzhou, within walking distance of Pingjiang old street (Soochow is the old romanization of the name of Suzhou, by the way). I’d always been curious and wanted to visit it, but never managed to find the time until one day last year. As I came to China as a student several centuries ago, studied Chinese in 2 different schools in Beijing, and visited many other colleges where I had friends, Chinese universities always bring me good memories.

Universities in China are like miniature cities. Most students live in dorms within campus and it’s perfectly possible to get everything you need without ever crossing the campus gates: there are shops, supermarkets and restaurants inside. At least when I was a student, more than 10 years ago, my Chinese campus mates didn’t really go out at night or do crazy things. I became friends with my language exchange partner and invited her to a party in a bar once; she told me she had never been in a bar (she was 23) and weren’t bars places where only bad people go? I’m not sure if it’s like this in all cities, though; universities in Beijing are highly coveted and only the best students from all over the country manage to get there after years and years of nonstop cramming and testing, so it’s only understandable that my friend never had time to waste in useless places. On the other hand, my husband says he spent his university years gaming in internet cafes and singing in rock bands… but I think that’s uncommon!

Soochow University didn’t disappoint when I finally had the chance to stroll around its grounds. By the way, Soochow is the old romanization of Suzhou’s name, like Peking and Beijing. According to its website, it was founded in 1900 by the American Methodist Episcopal Church. 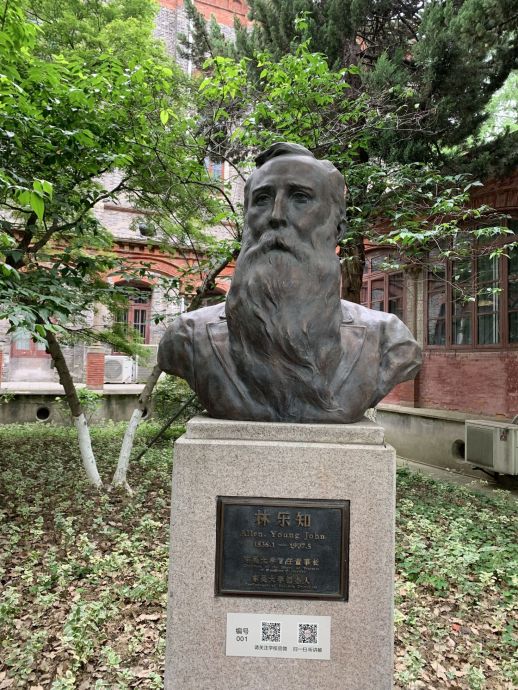 The university’s original name was Dongwu Unversity (东吴大学). Dong means east and Wu was the name of an ancient state which had its capital in Suzhou more than 2000 years ago.

The old campus gate with the previous name, Dongwu University.

… but also Chinese elements, for sure.

And park-like, open spaces where students play sports and children run around.

I don’t remember seeing it when I went, but the university logo seems a little outdated:

Maybe a better English logo, more suitable to current times, would be “Unto a full grown person”.

Ah, I would love to be a student again!

16 thoughts on “A stroll around Soochow University”