The other day, when I was walking Nico in the morning, I saw a girl on her electric bike. She was wearing a bright plastic-looking jacket with long sleeves and the hood up, and black tights. Considering it was like 35 degrees (and only 9 a.m.), I pitied this girl. But, as we say in Spanish, to be beautiful you have to suffer! And this girl was just trying to keep her skin as pale as possible. Let’s talk about beauty standards in China!

Some Chinese have very white skins and others have darker complexions, but in general I’ve found them to tan quite easily. In Spain this would be a blessing, as we consider tanned skin to be pretty, but in China being tanned is the worst thing that can possibly happen to a girl (except being single, of course). Chinese people think tanned skin proves you are a peasant so they hate getting browner. Pretty, urban girls with good jobs in nice offices don’t get tanned. Because everybody wants to have white skin, most lotions and other cosmetics sold in China contain whitening agents. Make up always makes you look whiter. In Spain, on the other hand, you can buy body lotions with tanning effects and make up usually makes you look a bit tanned.

There is currently an advertisement on Chinese streaming apps that shows several girls in an office with their faces completely brown. Another one has a very white face and they ask with envy: “How can you be so white?” She replies: “Because at lunch time I use the Meituan app to deliver food to the office instead of going out!”

“Use the Meituan app instead of going out for lunch and you will be whiter and whiter every day!”

Having a white skin is probably the most important beauty standard. If you don’t fulfil some of the others but are very pale, you will still have a lot of points in the beauty scale.

Most Chinese young women are obsessed with their weight. As a general standard, if you weight more than 50 kg you are considered fat. [I think the last time I weighted 50 kg I was 11 years old… ahem]. I know the desire of being thin happens everywhere, but I get the impression that here it is even more widespread. In my previous job, all my office mates were Chinese girls. More or less every day one of them would say, “I won’t go to have lunch today, I will not eat anything because I am fat”. None of them was objectively fat. The heaviest one had a size similar to mine.

Every few months, a new “skinny challenge” appears in Chinese social media to prove how thin you are. The most famous ones are the “waist narrower than a A4 sheet of paper”, the “knees together can be covered by an iPhone” and the “holding coins in your collarbone”.

Holding coins on your collarbone to prove you are skinny enough.

The “waist narrower than an A4 sheet” challenge.

Before coming to China, I didn’t even have the concept of small face in my mind. I knew some people have big heads, others have round faces, but… small faces? I had never heard it. In China, having a small face is highly desirable because most people have it round. Basically all the Chinese women I know have at some point told me that my face is so small, how do I do it? Ehm, I don’t think I do anything, I’m just like this, small faced and fat assed.

The best face shape you can have is the “inverted melon seed”: oval shaped and with a small chin. To achieve a visual effect of oval face, many Chinese girls (and also Koreans) put their hands on the sides of their faces when taking selfies and do the kissy or duck mouth. 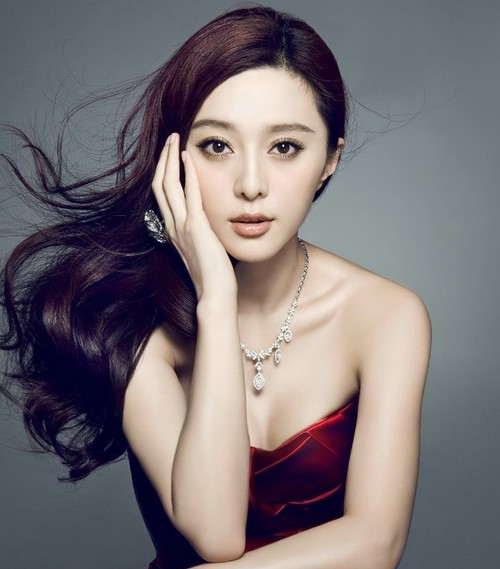 Big, doll-like eyes are all the rage. If you have small eyes, you can make them look bigger with make up and some special contact lenses. The double or single eyelid was also a concept I didn’t have before and only learned it after coming to China. Double eyelid is the standard western eyelid, that is, you can see a “wrinkle” above your eye. Around 50% of Chinese people have the single eyelid, and that is considered not attractive. Some girls who want to have a permanent double eye lid undergo surgery, but there are cheaper and non-permanent options like a type of rigid, transparent stickers that you stick on your lid to create a crease.

Chinese women always compliment my nose because it’s narrow and tall. Traditionally, westerners are considered to have big noses, but I think the main difference is that our nose is tall (it starts between our eyes) and for many Chinese, the upper part of their noses is flat.

Have you ever realised that beauty standards are mostly a way of nagging people? We always desire what we don’t have! Hundreds of years ago, when most people didn’t have an adequate nutrition, fat women were the epitome of beauty. Now, we want to be impossibly thin. In Spain, most girls have wavy hair and they spend a lot of time straightening it. In China, girls have straight hair and when they go partying or have an important event they curl it a bit. In Spain most people don’t have high cheekbones so we love them; in China most people have flat noses so they love high ones. We are never happy with what we have!

What are the beauty standards in your country?

← “Europeans are always on strike”
Chinese t-shirts with English slogans →

49 thoughts on “Beauty standards in China”