Parks in China are like a parallel universe where you can find anything. Of course, there are trees, flowers, benches and all the usual things that you would expect to find in a park. But what I like most about the parks in China is that they still are an important place for leisure and communal activities, specially for old people.  In my home country old people also like going to the park, but they just go, take a walk and maybe sit on a bench and talk. There’s not much to do. However, parks in China are buzzing with activity. I have seen it in practically every city and at all times of day: people dancing; singing in portable karaokes; playing cards, Chinese chess or even mahong; walking with their pet birds; playing instruments. You can basically do anything you want!

Once, walking around the old city center in Suzhou, I discovered a park that I hadn’t been to before. It was a Saturday in September, the weather was perfect and the park was full of people. Of course, there were several bands competing to be heard:

With each band there is always one or two singers performing popular old songs or Chinese opera. You have to be careful with your eardrums as women can sing really high notes!

There is always people dancing, too. But they don’t dance to the musicians’ tunes, they bring music and speakers from home and organise a party in less than 2 seconds. Watching them dance is always very amusing: there are the ones that attend dancing lessons and are practising their moves, some others are there just for exercising, some men are hesitant and don’t know which woman they should invite to dance… During the summer, at night, in every park there is a huge group of women doing aerobics or dancing Chinese folk songs. I would love to join them but they all know the steps perfectly and I don’t!

In the parks you can also observe a rare sport that I think is only practised in China: walking backwards. The first time I saw it I thought they were just crazy, but then I tried it. And I found out that if you walk backwards for five minutes you will discover that your body has muscles you had never noticed. So maybe walking backwards should be considered a sport!

But in this park in Suzhou I saw something I had never seen in any other park in China: people were fishing the goldfish from the pond! It wasn’t free, of course, you had to pay the guy in charge and then you could fish and take your preys home in a bucket. 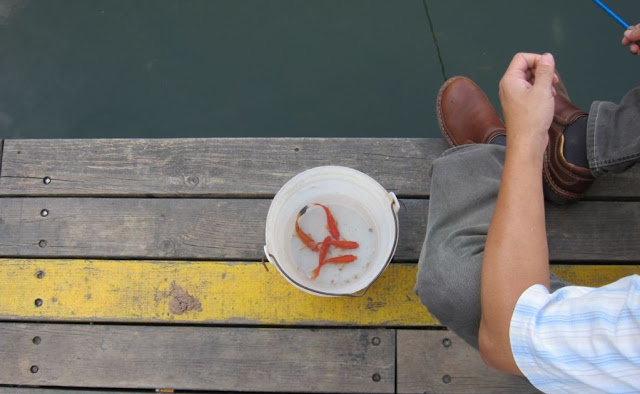 This guy just got 4. Definitely, today is not his lucky day. Maybe he should try dancing…