One of the things I like about Chinese people is that they have a very peculiar style and are not afraid of displaying it in public. I have seen people wearing very flashy clothes or impossible hairdos and no one ever bats an eyelid. In contrast, when I was 16 and still in Spain, I dyed my hair red. A random old man on the street told me my hair was ugly. Thanks for the unsolicited opinion, sir. However, if I had bright red hair in China, no one would even look at me. Well, they would because I am a foreigner, but they wouldn’t give a crap about the red hair. In fact, it seems the latest fashion in Shanghai and Suzhou is dying your hair blue, purple or green. Not only alternative young women do this, I have also seen it in middle aged women!

Perhaps this post’s title should be: Some quirks of Chinese fashion, but epic fails sounds more… epic, right? So, without further ado, let’s check the list I prepared. For a post of this kind, pictures are absolutely necessary, but unfortunately I didn’t have my own pictures so I got them from Baidu, the Chinese Google. I have always wanted to take a picture of the guy walking the dog in his pajamas or the lady with Marge Simpson’s hair, but I am too shy.

1. People going out in their pajamas

This a classic in Shanghai and nearby areas. You suddenly realized you are out of salt and have to go to the supermarket downstairs? Uhm, it truly is a waste of time changing to your street clothes just for that… And I can kind of understand that, but what I can’t understand is when I see a couple spending the afternoon in the mall in their pajamas (I really should have taken that picture).

There are two types of pajamas: the summer ones and the winter ones. 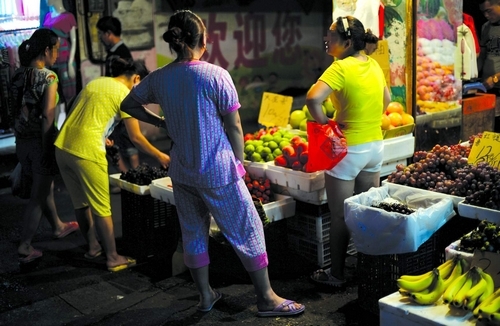 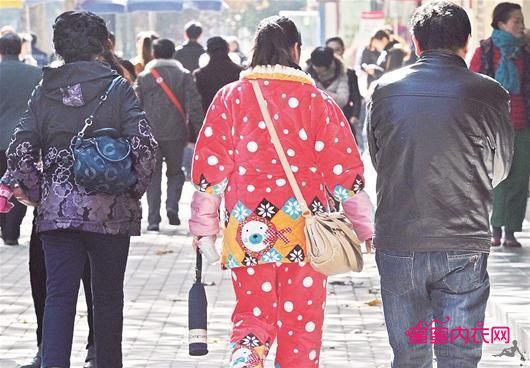 I have to confess that I might have walked the dog in my pajamas more than once… ok, more than 50 times probably. But it is not the same pajamas I use for sleeping! It is the “stay at home” pajamas.

Going to a Chinese shop to buy clothes can be hard. You see a blouse that looks nice, but when you look at the front it has an ugly frill. Or a Playboy bunny made with fake diamonds (Playboy is actually a clothes brand in here). There is always something not ok on Chinese clothes. Also, some patterns can be too risky for more moderate tastes. Sometimes I see some ladies on the street and I wonder if they don’t have a mirror at home!

A few years ago I started to notice this trend of wearing frames without lenses. As wearing glasses has always been considered totally uncool, I couldn’t understand it at first. But then I thought: Well, I like wearing glasses. Maybe if I didn’t need them I would like to wear them sometimes, the same way I can wear a necklace or a pair of earrings. I remember I read Spanish forums and people were heavily bashing on this trend. Hey, let people wear whatever they want! I would also wear this super cute Hello Kitty frames without lenses:

I have actually tried these glasses on. Too big and round for my small face, bwaaaah!

Many Chinese girls wear a strange kind of contact lenses that make their eyes look bigger. It is very scary because they look extremely unnatural, but they seem to like it and it is very common. Take a look around when you are riding the subway and you will see it for sure.

And look at this: I have actually never seen this live, but I found the picture when I was looking for the Hello Kitty glasses. Oh. My. God. 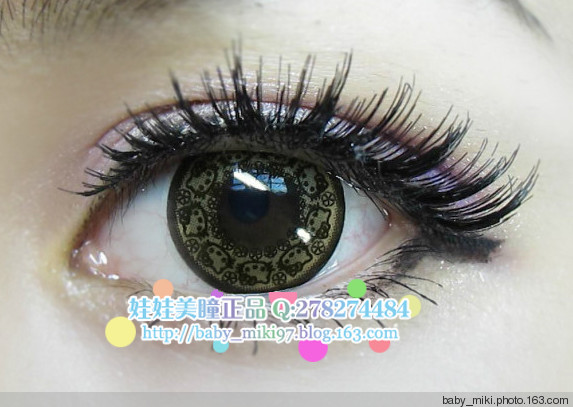 Notice also the fake eyelashes and the sticker to make a double lid. Also very popular.

This is becoming quite rare, thank God I haven’t seen it in years. A tracksuit. Preferably a plush one, Juicy Couture kind of thing. With a fake Chanel bag. And high heels. I fail to guess what those women were thinking when they decided to combine these 3 things.

This is the male version of the tracksuit and high heels, and unfortunately quite common, particularly in the countryside. Imagine: a formal shirt or a woolen jumper, with sports pants and sport shoes. The definition of pure horror. The guy who proposed to me once in Beijing used to dress like this.

There is also another version of the masculine fashion epic fail: too baggy (because the wearer is very skinny) pleated trousers with the usual horrible fake leather shoes that countryside men nomally wear, white socks and a sports jacket. Kill me, please. If you have never been to China and can’t picture what I’m talking about, it’s better for you. (Sorry, I couldn’t find a picture, I don’t know what to write to find it!). If you have been to China, I’m sure you have in your mind the image of a man, dressed as I just described, squatting and smoking a cigarette. It’s a Chinese classic.

7. Pants up to your armpits

This a must among elder Chinese men. Members of the government seem to be big fans too. One of the most iconic representatives of this trend is the ex president Jiang Zemin, who never misses a chance of sporting this look.

I am not going to tell you which one is Jiang Zemin. There’s no need, you will just know.

This is a must among Chinese ladies. It seems they are scared to wear sandals without anything interfering between the shoe and their skin. Are they afraid that their feet will catch a cold? Or is it just that the awful quality of Chinese cheap shoes forces them to wear socks if they don’t want to be skinned alive?

This always causes a stir on the internet but to be honest I have never seen it in real life. I don’t really go to Chinese beaches, maybe that’s why. What it is fairly common in cities is Chinese ladies riding a scooter and wearing a kind of black screen that covers their face and long gloves up to their shoulders. Being tanned is not glorious. The whiter you are, the better.

The swimsuits are also very beautiful, right? I’ve even written a post about swimwear before!

Children’s clothes are usually super cute, right? Well… not in China. The poor kids are stuck with pretty ugly garments. For the girls, pink chifon and princess dresses abound. In winter, the “must” is a kind of super thick coat that makes the poor baby look like a starfish and they can’t even move. Obviously, under the super thick coat they are still wearing 28 other clothes, because God forbids the kid gets a cold. Chinese kids could incubate chicks inside their clothes! Have you ever noticed that they are always sweating and have very red cheeks?

And, of course, we can’t fail to mention the split pants. You haven’t been to China if you have never seen a baby’s ass between the two sides of a split pant!

I can’t imagine what this poor baby has to wear when he is OUTSIDE the house. He’s inside and all bundled up…